I am having a good hair day and wanted to share it with the world :p HAPPY NEW YEAR, EVERYONE!

from a Manic Monday prompt

Once upon a time, I lived on The Loverly Isle of Long, and I would get my roots done every 4 weeks with the PERFECT shade of strawberry blond. Not too blond, not too red, not too dark, not too light, the formula was the product of several years of trial and error with my hair stylist/colorist, Nancy. The final formula is comprised of three different shades from L’Oreal‘s professional line called Majirel, using 20-volume developer.

To say that I was obsessive about the appearance of gray brown roots is to understate the anxiety that would grip the core of my very being at the least whisper of new growth. I did some unusual things in order to preserve the color as much as possible until it was time to get it done again. I would refrain from using actual shampoo for 2 or three days after coloring. I used a conditioner called “Strawberry” every day (made by ARTec, which had been bought by L’Oreal). I would only use COLD water on my hair to discourage fading from heat, and would not use shampoo more than every other day. All of this, because red hair color shades are notoriously difficult to maintain. I did everything I could to ensure that the color remained fresh until it was time to beat the roots into submission once more.

Just prior to moving to Florida, I went to see Nancy for the last time and she wrote down my formula for me. Clutching this sacred slip of paper in my feverish hand, I also entered it into my Palm Pilot for posterity. Four weeks later, I walked into a local salon here in Southwest Florida, showed them the formula and asked them to replicate it. 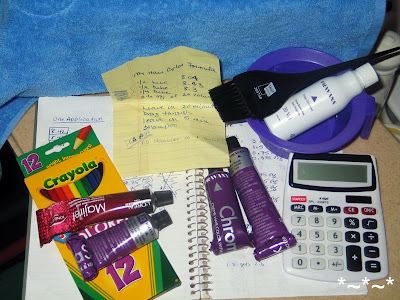 Problem #1 – they don’t use L’Oreal Majirel and in fact, they never heard of it. When I said “L’Oreal”, they thought I’d been buying hair color kits over the counter in the supermarket. I had to educate them.

Problem #2 – I had to look at the color board and figure out for myself what might work. They were not at all willing to make a decision and then be accountable for it. Apparently, no one in this shop was the color genius that Nancy had been, and they lacked the confidence that goes along with such a level of genius.

Problem #3 – over the next two years, the stylists in that salon wracked their brains, played mad chemist, adjusted the formula time and again, but it was fruitless. They could not get it right. The color never looked even close to my old shade, and it also never looked natural. Sometimes it was too yellow, other times too burgundy. Yet other times, it appeared that my hair color had come from a box that said “Crayola” on it – amazing shades, but totally inappropriate for the hair of a grown-up businesswoman.

A “woe is me” post I made on a discussion board this past spring was read with sympathy by one of my Sanibuddies (that’s a buddy I met online who loves Sanibel Island as much as I do), who happens also to be a wonderful hair stylist and colorist. She had a vacation already planned for May, so I emailed her the formula and she picked up the supplies as soon as she landed in Fort Myers. Then one sunny spring afternoon, I drove out to the island to see her and she worked her magic. I cannot describe the happiness I felt when I looked in the mirror and saw my old familiar shade of strawberry beaming back at me. Yay!

We decided that I would figure out how much stuff I needed to do my hair for a year, and my colorist buddy would pick it up for me before she left. You have to be a licensed professional to buy the materials – I have no idea why that is but that’s the way it is. So she called ahead to put in the order before picking it up, and tragedy struck. One of the three L’Oreal shades required to make my color was discontinued! No more! THE END! I was horrified. After all this time struggling, to finally reach Nirvana only to have all my hopes dashed to hell. Not fair, not fair, not fair!

My friend did some research, consulted with some professionals and sent me a package when she got home. Inside the package were tubes of what she hoped would be a suitable replacement for the L’Oreal formula. The new company name was Pravana. I called Tootie and we made a Hair Day appointment. We were both plenty nervous. After following the proportions originally set out by Nancy all those years ago, it seemed like we had a ton of formula – too much just for a root job. So we decided that, since I was changing formulas, we might as well do whole-head, to avoid getting a stripe, and I made a mental note to halve the formula next time.

I will never forget leaning over the kitchen sink to wash it all out, and hearing Tootie remark calmly, “well, it looks exactly like a bright copper penny”. OMG, that’s not strawberry!, I thought frantically. What have we done? I could scarecely wait to see in the mirror, but tried to remain calm as the shampooing and conditioning proceeded. Finally, I was standing before the mirror with a comb in my hand trying to detangle. It was definitely REDDER than I was used to seeing after coloring, but it wasn’t horrible or unnatural. It looked even better after blow-drying; something about being wet had made it really bright, but the dryer it got, the better it looked. I took a picture with my Blackberry and emailed it to my Sanibuddy colorist friend, who by this time had long since returned home from her Sanibel vacation.

The next time we decided to have Hair Day, I discovered that althought I still had plenty of color left in the tubes, I didn’t have enough developer to get the job done. This is because we made so much formula the last time; if I had realized and cut it in half, there still would have been enough developer left. I had figured out that a tube of L’Oreal hair color is about half the size of a tube of Pravana. So when Nancy’s formula said, “half a tube of this and a quarter tube of that”, and I follwed it for the Pravana, it actually made double the amount of formula – and took double the amount of developer. A few emails back and forth with my colorist buddy, and we finally had a shopping list for a year’s worth of supplies.

So I sit here typing with 6 week old roots, waiting for my shipment. When it arrives, Tootie and I will have another Hair Day. What amazes me is that I have not fallen over from root anxiety yet, even though my roots are definitely beyond the point of screaming. The net result of this new formula is, as Tootie points out, the roots are not as noticeable when they come in. The contrast isn’t as sharp, so they’re not screaming quite as stridently as they used to. We’ve also discovered that after about a week and a half, the color fades a bit to where I want it to be, an extremely close approximation of the L’Oreal shade.

The quest for strawberry led to copper, and not without angst – but all’s well that ends well. These little trials and tribulations are necessary in life. They keep our minds occupied, and keep us off the streets and out of trouble!