Before leaving for Disney World last week, I made a trip to Barnes & Noble to spend my Groupon. I nearly bought a Martha Beck book but suddenly had an inspiration. Why not download the audio version instead and have a listen during the 3 hour drive? So I used the Groupon to buy some other books instead, and then I downloaded Martha when I got home. I listened some on the drive up to Orlando on Thursday.

On Friday, the family visited Disney’s Animal Kingdom. At some point, we went to see “Finding Nemo: The Musical”. Incomprehensibly, I’d seen the film but I’d never been to see the live show before. In fact, I haven’t been to a live show since a couple of years ago when I treated my nieces to “The Little Mermaid” on Broadway for Christmas.

I definitely had “the roar of greasepaint” in my ears from nearly the moment I sat down. I found myself examining the tech setup, or what I could see of it, analyzing the vocal production of each cast member, marveling at the puppet costumes… and crying.

Tears streamed silently. I was conscious of not drawing attention from Chez Bro or SIL, so wiping them away became a furtive, covert activity. And I wondered why. I was not sad for the story, and did not feel particularly sad in general. All I could come up with, as I watched the performers, was “I used to do that”. 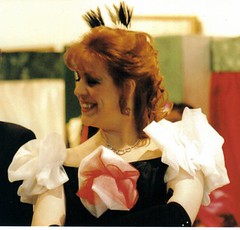 Yes, it is true – I used to do that. From the time I was 8 years old until maybe 2004-ish (I turned 44 that year), I used to perform. Early on, it was musical theater, but along about the time I turned 30, I started performing with local opera companies on Long Island. I studied for a bit at The Juilliard School in their opera workshop program, and I studied privately nearly every week for more than 20 years. I am a lyric mezzo soprano, most suited to the French repertoire, but I can get away with Verdi in a small hall.

All in all, I have to say that even though I was good at opera, musical theater was my first love. There came a time where I realized that I was only doing it for the 10 seconds of applause that would occur at the end of each solo number. How I discovered that fact and how it had come about are another story for another day. The point in bringing it up is that once I no longer needed those 10 seconds of applause, I had to figure out a different reason to do it, or else abandon it. So I did it for fun. If a role looked like it wasn’t going to be fun, then that meant I wouldn’t be doing it. That was liberating – no longer would I have to put up with singing jobs or conductors or other performers that were unpleasant, simply because I needed the money or wanted to put that role on my resume. Now I could accept or reject roles based upon my fun factor alone. 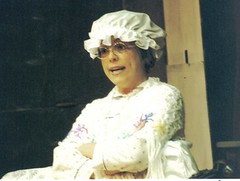 Proportionate to the sheer volume of people who have good voices and love to perform, very VERY few of them can actually make a living at it. And it’s exhausting to do something else for a living and perform on the side – although lots of people do that just for the love of it. So I went along like that for a while, until having a career and going to school and performing all at the same time became too much for me. I did that for several years before breaking down and confessing that if I was going to finish my degree, I’d have to stop performing. I kept up with my weekly voice lessons but stopped using that time to learn and polish new roles. That was pretty liberating, as it turns out. Relieved of the goal-oriented burden of role preparation, I could now sing whatever I wanted in my lessons. Out came the show tunes, the pop music, the weird little ditties I’d collected over the years but never had time to learn. Out came the French art songs that sounded so stunningly gorgeous in my voice.

About 4 months before I relocated to Southwest Florida, my voice teacher passed away. What a sad time it was for all of us who had literally grown up with her in our lives! The first memorial gathering was truly a sad affair. There were only two of Gloria’s students who managed to get up and sing. I was one of them. That was winter of 2006. I stood up and sang some karaoke one night at the Walt Disney World Swan about a year later, but that’s been the extent of my “performing” for a while. I have not really looked for any performing opportunities since I’ve been down here. It just hasn’t been on my radar. 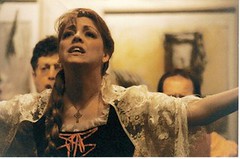 So I was pretty surprised to have my old love, the wicked stage, surge to the forefront so unexpectedly, without warning. Or… was it? On the way home from Orlando yesterday, I picked up Martha Beck where I’d left off. She told a story of attending a convention in Washington D.C. and related a conversation she’d had there with a woman she called “Rosario”. The woman told Martha that she’d always thought she’d eventually relocate to D.C. and began to cry – but she didn’t know why. She wasn’t particularly sad. Martha felt strongly that there was something to it, this feeling of “pull” toward D.C.

18 months later, Martha caught up to Rosario in London and asked how things were. Hectic and crazy since the move, came the reply. Oh, a move? Yes, I guess you haven’t heard – Rosario then told Martha that she’d moved to Washington D.C. because she’d been appointed Treasurer of the United States of America!

Martha uses this story to underscore the importance of being aware of and following physical cues in the quest for our authentic selves. OK, well that explains a lot. It explains why there were years during which I was ALWAYS sick – and why now I almost never am. I was emotionally and psychologically allergic to my job and my environment. Now I’m not. It explains why I never liked raw onions and why, if I try to eat them in something (like tabbouleh), I get a gawd-awful headache and feel nauseous in the head. Our bodies DO tell us what we need; not just physically but emotionally and psychologically too (and probably spiritually as well).

So I’m not sure how helpful this episode has been. I still need income and I’m pretty sure the kind of income I need is not going to come from getting discovered at age 50.

Finding Your Own North Star: Claiming The Life You Were Meant To Live By Martha Beck
CLICK HERE for HARDCOVER

Leading Between Two Worlds: Lessons From The First Mexican-Born Treasurer of the United States
CLICK HERE for PAPERBACK